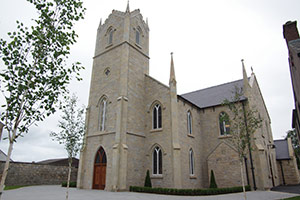 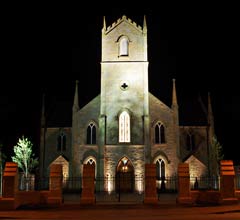 St. Patrick visited Donaghmore in the 5th century and established a church here. He converted the local people; the Fír Imchlair, to Christianity, and left a priest named Colum Cruither in charge.

The monastic period had come to an end and the church was being reorganized along diocesan and parochial lines. It took years for the new systems to develop. It was at this period that the O’Neills had made their way from Inishowen to Donaghmore. We don’t have a lot of information about the centuries that followed but we do know that churches and church lands were looked after by erenagh families. In Donaghmore the O’ Loughran family was the erenagh family and they gave many of their sons to the priesthood. A branch of austere monks called the Culdees were still in the parish until the Reformation. The whereabouts of the church at Donaghmore or Knocktemple, as it was once known, is uncertain but it is thought to have been in the vicinity of the old graveyard.

After the defeat of the O’ Neills at the Battle of Kinsale in 1601, Mountjoy and his soldiers came north to Ulster, and the Plantation of Ulster followed, bringing with it major changes. The church lands that had been farmed by the O’ Loughrans for generations became the property of the Protestant Archbishop of Armagh, and well over 1,000 acres of the O’ Donnelly lands at Ballydonnelly was given to career soldier, Toby Caulfield.

Donaghmore’s Martyr, Fr. Patrick O’ Loughran (1577-1612) Fr. Patrick O’Loughran was a member of the O ’Loughran erenagh family of Donaghmore. He was described by some sources as being secretary to Hugh O’Neill. Patrick O’ Loughran travelled to Flanders in 1607; he had travelled to the Continent on the same ship as the O’Neills but not with them. He was arrested on his arrival from the Continent to Cork in 1611 and taken to prison in Dublin.  He was taken from prison in Dublin Castle and across the River Liffey to George’s Hill, on the first of February 1612, where he was hanged, drawn and quartered.

By the year 1622, an Established Church for the new Protestant settlers in the area had been erected in the old graveyard. The loss of their lands created great distress among the local people and they harassed the new settlers.  In 1641, a rebellion fuelled by resentment against the Crown for loss of their lands and the imposition of penal laws was led by Patrick Modra O’ Donnelly. The rebellion failed and in the end, any lands still possessed by the natives was ceded to new landlords.

There followed many years of penal laws against Catholics and Dissenters but by the 1770s, emancipation of Catholics began to be discussed and in 1793, the Catholic Relief Act allowed the building of Catholic churches, but with many restrictions. In 1800, Lord Ranfurly granted the Catholics of Donaghmore a small site in the village on which to build a church, and local Protestant ministers, businessmen and neighbours helped the people to build their first Church, for many generations. It was completed about 1807. From time immemorial, Catholic services for Donaghmore people had been held in the open air with no covering to shelter them from the elements.

In 1829 Catholics were emancipated and a great boom in church – building began throughout Ireland. In 1845, Fr. Neill Mc Gucken PP,  Donaghmore, decided to knock down the first church here and build a bigger and more suitable one on the same site. This church today is that same church. Sadly, Fr. Mc Gucken died from typhoid fever before the new church was built, and Fr. Francis Devlin, parish priest of Tullyallen was appointed. He finished the building of the church and it was consecrated in October 1846, right in the midst of the Great Famine.

Donaghmore parish was severely affected by the famine and lost many parishioner to famine and forced emigration.

The first mission was held in the church in 1857. The next major renovation of the church was carried out by Canon Mc Cartan PP, in 1895. The chancel was extended and we got our beautiful stained glass windows from Mayer of Munich, in Germany. The parochial houses were built at this time too.

This website uses cookies to improve your experience while you navigate through the website. Out of these, the cookies that are categorized as necessary are stored on your browser as they are essential for the working of basic functionalities of the website. We also use third-party cookies that help us analyze and understand how you use this website. These cookies will be stored in your browser only with your consent. You also have the option to opt-out of these cookies. But opting out of some of these cookies may affect your browsing experience.
Necessary Always Enabled
Necessary cookies are absolutely essential for the website to function properly. This category only includes cookies that ensures basic functionalities and security features of the website. These cookies do not store any personal information.
Non-necessary
Any cookies that may not be particularly necessary for the website to function and is used specifically to collect user personal data via analytics, ads, other embedded contents are termed as non-necessary cookies. It is mandatory to procure user consent prior to running these cookies on your website.
SAVE & ACCEPT