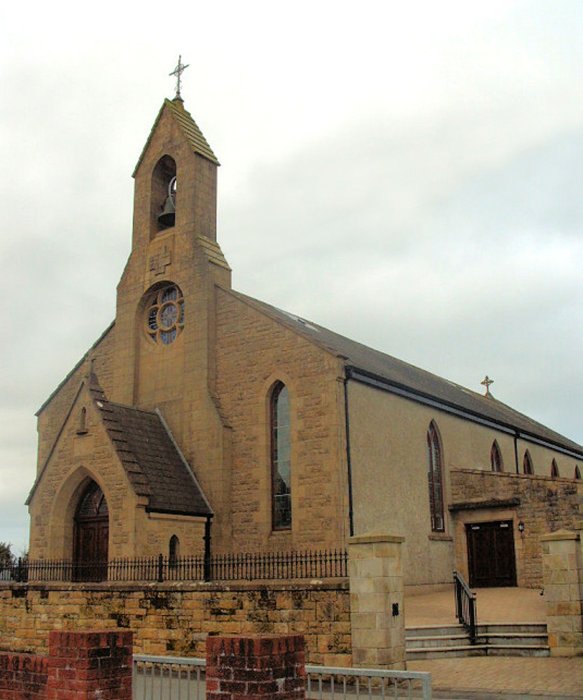 A Brief History of St. John the Baptist Church, Galbally By Charlie Donnelly

This will give a background of the Catholic faith in Galbally area, as the faith did not just begin in Galbally with the building and opening of the Church in 1842, but can be traced back as far as the 13th and 14th hundreds.

The names of the O’Neills and McDonnels of Tyrone are part of the expansive history of Ireland.  O’Neill’s troupes were based in Dungannon and would have stayed overnight in O’Neill’s fort in Crosscavanagh for safety.  The McDonnels came from Scotland into Ulster in the early 14th century and were based in Knocknaclougher which is near Cappagh. Mass would have been said in these areas on a regular basis.

It was in 1537 that King Henry the VIII split the Catholic Church when his officials notified the then Pope Paul III on the 1st November 1537 that he, the Pope, was no longer the head of the Church.  The Catholic clergy may not have been fully aware how this catastrophic event was to play out in their times or how this decision would lead to centuries of turbulent strife in the history of Ireland leading to so many Martyrdoms in the priesthood and laity alike.  For example; three years later in January 1540 in a Monastery in County Monaghan, 9 Franciscan priests and the entire lay staff were executed by the British authorities.

In 1542, King Henry the VIII implemented the Kingdom of Ireland Act, which allowed him to seize all Catholic Church property.

On the 4th July 1605 a new Apostate arrived in Ireland with the bible in one hand and a sword in the other. This Apostate, led by King James of England declared that Catholics would have to worship God under the rules of the Church of England by attending Protestant Churches. All Catholic priests were banned from living in Ireland and it was decreed that they should leave Ireland before the 10th December of that year, or face execution. This decree also stated that no Catholic would be allowed to own or buy land or be educated.

Now, while Hugh O’Neill may not have obeyed all the rules of the Catholic faith, he nevertheless was a strong defender of the Catholic Church. This period of Irish history later become known as the Penal Days.  Those wanting to hold on to their Catholic faith were entering into a period of great strife and persecution, sometimes to the point of martyrdom. Such was the conviction of Catholics to hold on to the truths of the gospel that they found secret ways to worship by attending Mass in secret locations.  These areas became known as Mass Glens, which today can be found dotted all over Ireland. The people of Galbally worshipped in secret a short distance from where the Church is today, in the town land of Gortindarragh.  The original Altar Stone used at that time is now in the possession of Brian Hackett, Glenburrisk. It incidentally was found in a house belonging to brothers Barney and Hugh O’Neill, of Gortindarragh the descendants of the O’Neill’s of Gortnagoley, who are part of the O’Neill clan.

In 1690, the Franciscans rented 40 acres of land in the town land of Terrenew from Toby Caulfield with the intention of setting up a Friary and this was on a thirty year lease that lasted until 1810 when the Friary closed.  The last Franciscan Friar was a Fr. Francis O’Neill who then became parish priest of Donaghmore in 1810.  He died in 1816. A few years later a Mass Hut was erected in the place which we now know as the priest’s garden and we believe that this was erected to accommodate the people of this end of the parish who may have attended Mass in the Friary and was still in use up until our present church was built.

Up until 1830 the top end of Donaghmore parish belonged to Tullyallen parish, (present day Killeeshil).  In 1837 four townlands namely Almore, Shanmaghery, Camaghy, and Largylea were taken from our parish to enable the setting up of the Pomeroy parish. These were known as church lands and the landlord was the Rev. Robert Stack who was the Church of Ireland minister.

In 1837 a Fr. Neal McGuckin became parish priest of Donaghmore and his first task was to build a school in Coolmaghery which was opened on 15th June 1840.  One year later, in 1841 he decided to build a church in Galbally. The landlord of the area was Ralph Mansfield and he resided in Castlerey, Co. Donegal.  Permission had to be obtained from Ralph Mansfield, so two local men, by the name of John O’ Loughran and John Brannigan, made their way from Galbally on foot to Donegal to negotiate a site for the establishing of the church here in Galbally. The agreement was signed on 2nd June 1841 and it stated that the church had to be built a year from the signing of the agreement but did not state a date for its completion. In keeping with the regulations at that time, the building had to look like a barn showing no visible outward signs of it being a church so as not to offend the Protestant community. Work commenced within a few weeks and most of the work was voluntary. The stone for the building of Galbally church came from Tullyleek and it was people from Altmore, Altaglushan and Crannogue who after selling turf in Dungannon brought back loads of stone on their return journey.   The door to the church was on the north side and the altar on the south side. St. John the Baptist Church was officially opened on Sunday the 16th October 1842 at 11am Mass by Monsignor Gossan from Drogheda. Quite a number of priests were also in attendance. It’s believed that the church was so named because the building work commenced in or around the 24th June, the feast of John the Baptist. The first curate of Galbally newly built church was Fr. Daniel Hughes who was appointed in 1838.

Forty nine years later in 1891 Fr. Eugene Clarke was appointed as curate in Galbally and in 1896 he organised the renovation of the church, which was the first of many.  It was at this point, in order to accommodate the growing numbers of the faithful, that there was a new design to incorporate a gallery which surrounded the altar. The work was carried out by McGurk contractors from Cappagh.  The new seating was made by Bradleys from Reclain and the windows were made by Bradleys from Corley.  The area was segregated with the door facing west to accommodate men and the door to the East to accommodate women.  The belfry of the church was built with stone from Carland and this work was carried out in 1927 by James McElvogue of Tullygun, Donaghmore.  At the end of August 1927 part of the belfry fell and the church had to be closed for a few weeks in order that repairs could be carried out.  The first bell was stolen in 1932 before it could be erected in the belfry and the present bell came from Pomeroy.

The next renovation began in May1983 which was overseen by the parish priest Canon Ward (R.I.P). The Contractors was Joe McGrath & Sons Old Castlecaulfield Road, Dungannon.   During this period Mass was celebrated in the local G.A.A hall.  It was at this time the altar was moved to the East end of the church and a side church erected alongside where the original altar stood. The gallery area was reduced in size to what it is to-day.  The church reopened on the first Sunday of July 1984.  The official opening took place on Sunday 30th September 1984 when Cardinal Tomas O’Fiaich celebrated Holy Mass to a packed congregation. In his homily the Cardinal referred to Donaghmore Parish being closely associated with St. Patrick and complimented two local families who supplied priests to the Donaghmore parish for over a hundred years, namely the O’Loughrans and the O’Donnellys   He especially referred to Blessed  Fr. Patrick O’ Loughran who was born in Annaghmakeown in the year 1577 and who was  Hugh O’Neill’s Chaplin.  Blessed Fr. Patrick O’Loughran, left Ireland with Hugh O’Neill in the flight of the Earls on 14th September 1607 to administer the Sacraments to the exiled noblemen. When he returned to Ireland in June 1611 he was arrested in Cork. He was subsequently accused of high treason and together with Bishop Conor O’Daveny was executed. They were both hanged, drawn and quartered in Dublin on Saturday 1st February 1612. On the 27th September 1992, he and 15 Irish martyrs were beatified by Pope John Paul II.  Religious persecution of Catholics in Ireland began under King Henry the VIII in 1537 and continued over several reigns until 1717, a period of 170 years.  Persecution of Catholics continued to a lesser degree from this period up and until 1829 which is the date of Catholic emancipation.

Ireland has suffered many hardships of one kind or another. One such heartache is emigration which still takes place up to this present day. Many have left our communities over the centuries to settle in different parts of the world and some are written into the pages of history.  One such parishioner is Fr. James Bloomer from Glenburrisk.  He was born 2nd-October 1841 and he went to America on 21st June 1861 and ordained to the priesthood in Buffalo, New York on 18th December 1868 by Bishop Ryan.  He was appointed Parish Priest of St. Patrick’s in New York in 1871 and was responsible for building  St. Patrick’s Cathedral in New York along with his Bishop Fr. John Hughes of Augher, Co. Tyrone.  Fr. Bloomer’s mother Alice died on 24th May 1875 and it is speculated that he came back to Galbally to attend her funeral. He erected a headstone in her memory. Fr. Bloomer was the pastor of St. Patrick’s church and Dean of the Rochester diocese up until his death on 10th November 1931, in his 90th year.  He is interned in Elmira, New York.

In terms of priests in our most recent times, the longest serving priest in Galbally was Fr. Dan McDonald who arrived here in July 1946 and over his time endeared himself to the local community. Together with all his other priestly duties he was instrumental in reinstating the Pioneers’ Association. He shepherded our community until January 1972, when he was appointed Parish Priest of Loughgall, Co. Armagh.  He died on 24th July 1980 and was buried in Loughgall alongside Canon Patrick O’Brien who was born in Sessiadonaghy and died in 1907. On the occasion of what would have been Fr. McDonald’s 100th birthday, his two nephews Eamon and Michael Grant organised a memorial plaque to be unveiled in his memory on Sunday 6th November. The plaque is mounted inside the exterior wall.

Fr. McDonald was replaced by Fr. Patrick McGuckian who served us for 20 years and thankfully has now returned in his retirement years to help out in the parish. We are also blessed to have Fr. Breslin PE AP ministering in the parish.